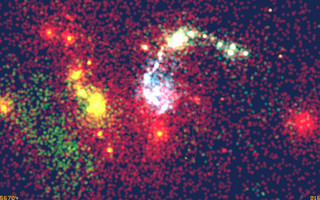 It is a 2D Gravity simulator that lets you paint stars onto a grid, and watch the galaxies evolve under the laws of gravity.

It lets you track single stars, and even put a black hole at the centre.

This fully interactive simulation is a great educational tool as well, to get an understanding of how bodies in space attract each other.

Sprinkle, Sprinkle, Little Star is available for free, for Windows and Linux computers with an AVX2 equipped CPU.